California and Washington created a new kind of primary system to fix the partisan primary exclusion inequality. Instead of segregating us by major party (or not), all the voters get a primary ballot that shows all the candidates, and the top two who get the most votes advance to the general election regardless of party. 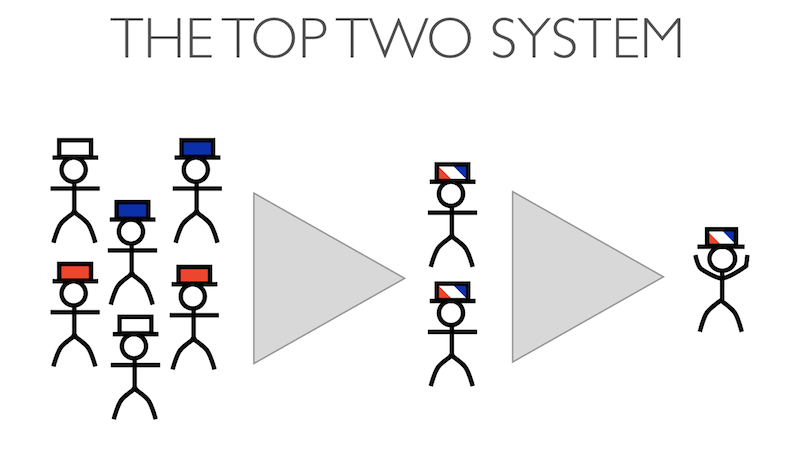 The vote between the top two is always equal. But what about the first stage? California's version of the top two has no requirement of equality in the primary vote. Instead, the California law actually reinforces the one choice limit, and so magnifies the spoiler effect inequality that compels "lesser evil" voting. 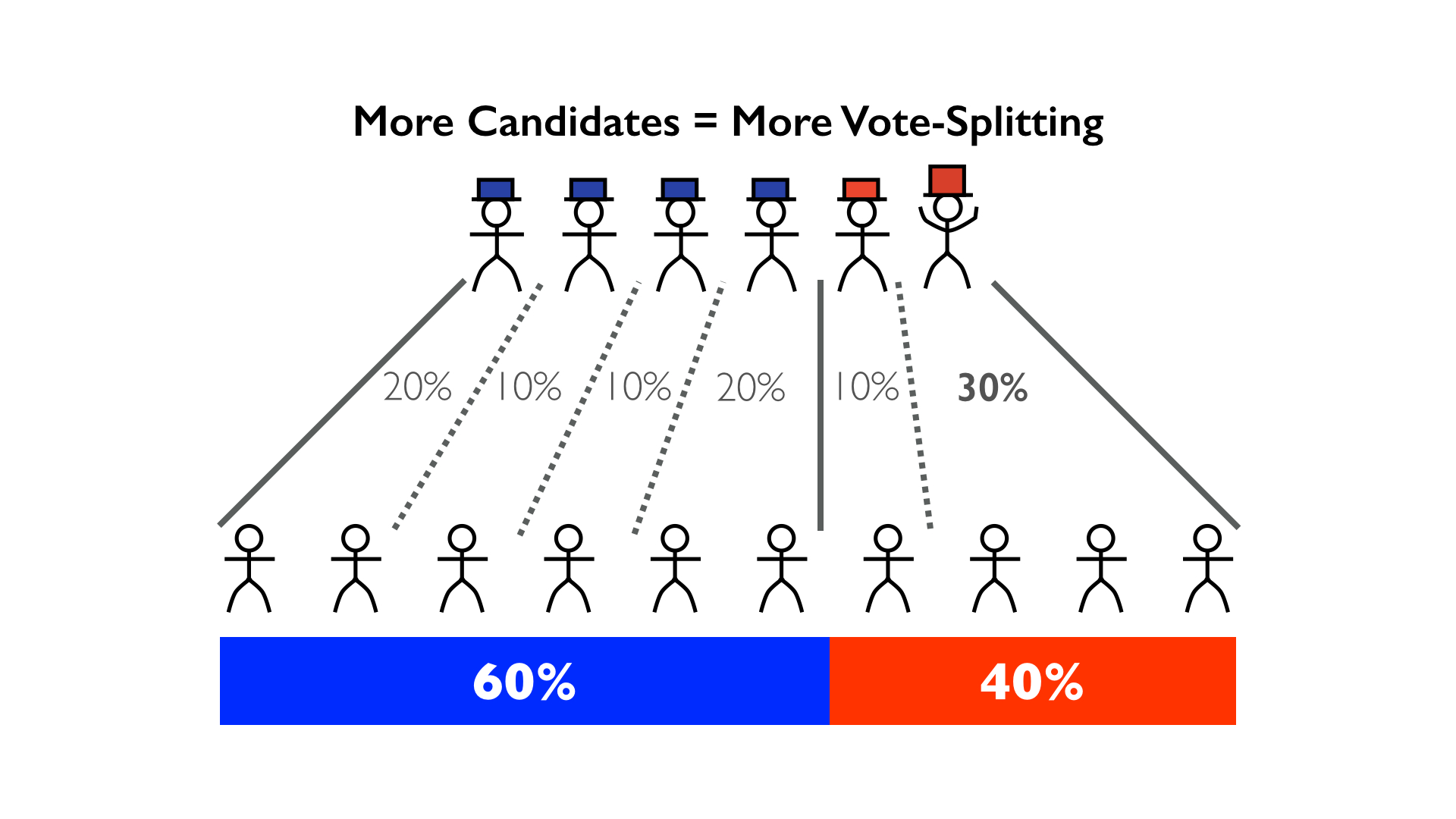 As a result, Californians have experienced directly the pernicious effects of increased vote-splitting: campaign costs have increased and in some cases two candidates advance who don’t at all represent the majority. Fundamentally, California's top two simply pushes the spoiler effect inequality into the primary vote.

Ranked Choice aka Instant Runoff Voting is another leading reform that has taken hold in several large U.S. cities and is used in national elections elsewhere in the world. Instead of limiting the voter to the choice of a single candidate, RCV/IRV allows the voter to rank order multiple candidates: first choice, second choice, third choice and so on.

To determine the winner, all of the first choice votes are counted. If one candidate has a majority, that candidate is the winner. Otherwise, the candidate who had the fewest first choice votes is eliminated, the votes of those who chose the eliminated candidate transfer to their next favorite candidate, and the whole process repeats. Sounds simple? Well at least sort-of simple? And equal? It would solve the spoiler problem, right?

Unfortunately IRV suffers from a few flaws that make it a less than optimal reform system. First, complexity: expressing full rank orderings of all the candidates requires a NxN matrix to assign each candidate a rank position. In practice the ballot may limit the voter to a specific number of choices. In San Francisco, for example, the voter is allowed a first, second and third choice:

Because the counting algorithm goes through one round for each losing candidate until a winner is decided, elections can take many rounds to compute. The image below represents a partial tally from an Oakland IRV race. It's very hard for observers to draw meaningful conclusions about voter preferences from these intermediate results:

The winner cannot be tabulated until all ballot information is reported to a central location. Many voting systems are "precinct summable", meaning that each polling location or precinct can report a subtotal, which can be summed together with the other subtotals to produce the final result. IRV is not precinct summable - all of the data from all of the ballots must be collected centrally before tabulation can begin.

But what about the Spoiler Inequality?

IRV's complexity would be a small price to pay if it produced an equal vote amongst the voters. Unfortunately IRV fails on this count as well. Because it uses the full preference information of only some of the voters and "shadows" the subsequent preferences of voters who choose a frontrunner in first position, IRV still suffers from a more generalized form of the spoiler effect: an honest vote for one's favorite candidate first can cause the election of the voter's least favorite candidate. To see why this happens, check out the simple explanation in the video below:

All Rank Ordered Voting Systems are Unequal and Unfair

The choice of a single favorite, a system known as Plurality Voting, is the simplest of the rank order voting system. There are many other rank order systems, including Instant Runoff Voting, that allow the voter to choose multiple candidates in preference order. Unfortunately it turns out that with more than two candidates, ALL ranking systems fail the equality test.

Why? Because in rank order systems, no matter the algorithm for computing the winner, it is always possible to construct a rank ordering for which there is no counter-balancing order. If I bullet vote (rank only a single candidate first), there is no way for you to balance out my vote. Whether that unbalanceable choice gives the bullet voter more or less power depends on the algorithm used to compute the winner.

It gets worse. A super smart guy named Kenneth Arrow, PhD., won the Nobel Prize for actually proving that it is impossible to construct a fair rank order voting system. No matter what algorithm is used to tally the individual rankings. This Impossibility Theorem depressed voting scientists for a half a century, for many took it as proof that democracy is provably impossible.

So again, how can a vote be made equal when there are more than two candidates in the race? Fortunately, there's a whole class of voting systems that don't fall under Arrow's Theorem, and are actually provably equal. These systems form the foundation from which equal versions of the Top Two and IRV can be constructed.

Up Next: Science! It Works!