The Science Behind The Movement

The field of electoral science has advanced considerably in the 200+ years since the founding of the country. In the field of voting theory, the study of voting methods was long defined by the analysis of methods through the lens of a large number of pass/fail criteria. This simplified the process of comparing voting methods side by side, as its fairly easy for mathematicians to prove what criteria are passed or failed, and then go from there.

Then, Kenneth Arrow, PhD. came along and won the Nobel Prize for proving that it was impossible to for any ranked system to pass all the criteria that are clearly and fundamentally desirable. The take away (which can be extended to voting methods in general) is that no method is perfect,  that a number of these criteria are mutually exclusive, and that identifying edge case scenarios that make a voting method look bad is a dead end approach. Arrow's Impossibility Theorem depressed voting scientists for a half a century, as some took it as proof that real democracy is provably impossible.

More contemporary work in the field takes a new approach: rather than stop at asking whether a system meets or fails a particular criterion, statistical analysis is employed to find out how frequently issues might arise under a given voting method, and to measure if and when those issues might impact election results or voter behavior. As it turns out, there are a number of voting methods that do well across the board, and there is absolutely no reason to use Arrow's Theorem as an excuse to settle for blatantly unrepresentative elections and a broken political landscape.

Recent work by Harvard Statistics PhD Jameson Quinn models Voter Satisfaction Efficiency - a percentage of how well a voting method performs between selecting the ideal representative candidate versus a random candidate from the field. This study is the first to compare STAR Voting (labeled SRV below) with other systems: 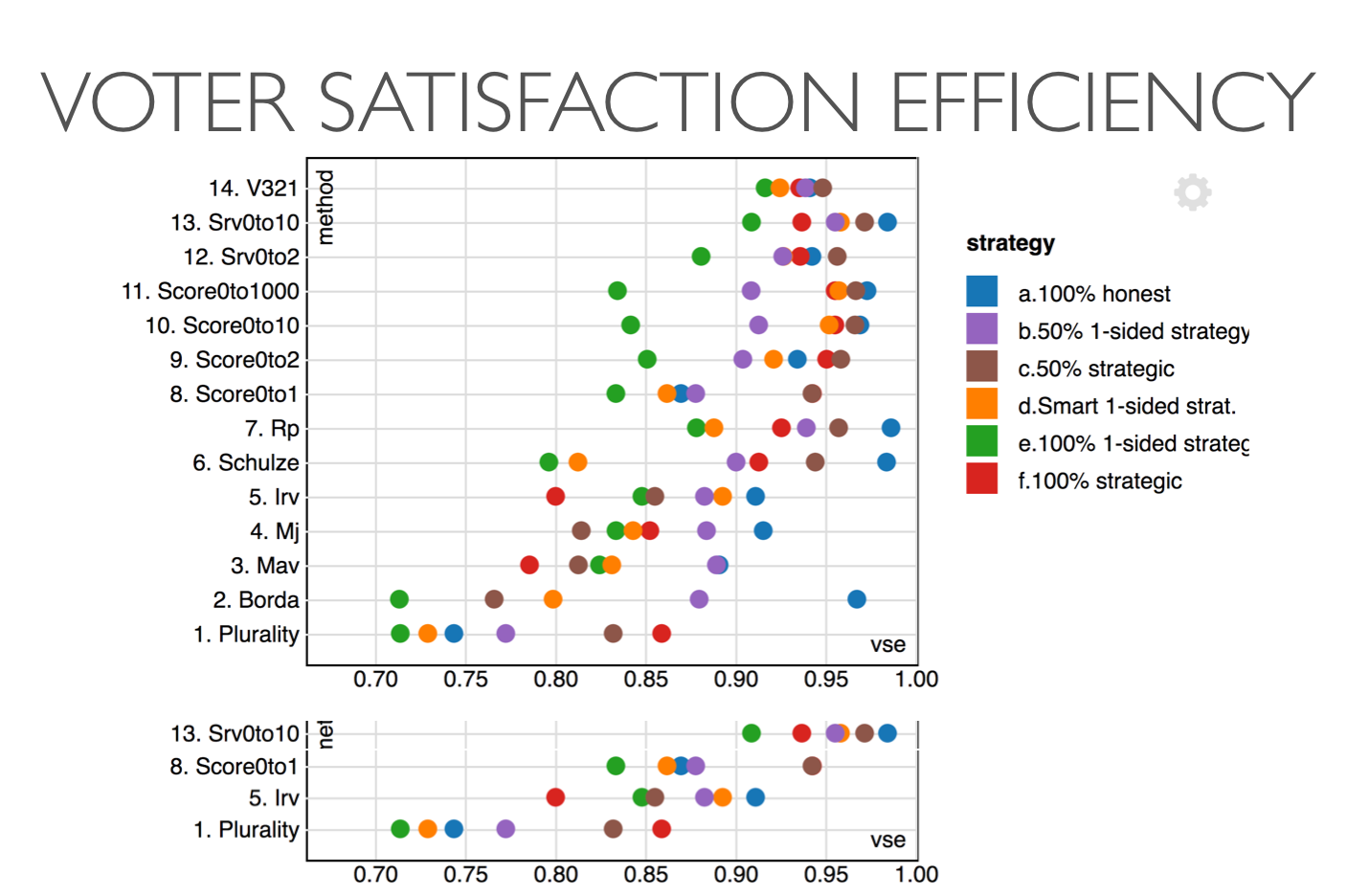 STAR Voting performs at the head of the pack across a wide range of scenarios, and with both honest and strategic voters. In fact, as the chart below shows, STAR's VSE with a 0-5 rating scale outperforms Score Voting with a 0-10 scale, and in its very worst case performs about the same as Instant Runoff Voting's best case VSE scenario:

These results confirm earlier work in the field. Princeton Mathematics PhD Warren Smith has characterized more than 50 different voting systems. Dr. Smith measured voting systems by two key performance measures. First, its propensity to elect the so-called Condorcet Winner. The Condorcet Winner is the one who would beat every other candidate in a head-to-head contest. The second measure, Bayesian Regret is a more comprehensive measure of the overall satisfaction of the simulated electorate at the outcome of the election. Systems that maximize the number of Condorcet Winners and minimize the electorate's simulated regret with both honest and strategic voters are best.

According to Dr. Smith's analysis, rating systems capture the top four spots as measured by both key performance measures of voting system efficacy. 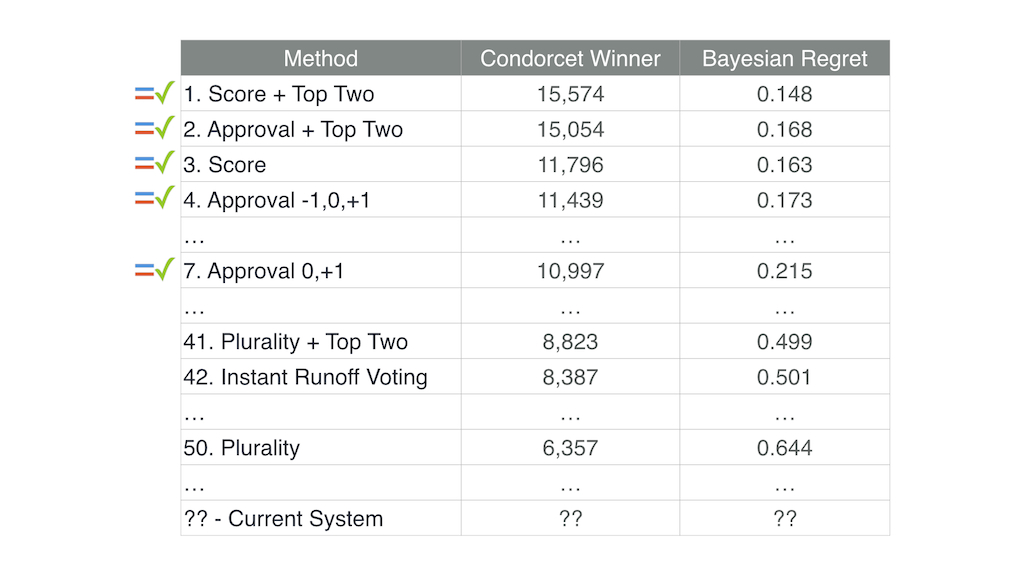 Instant Runoff Voting is at #42 on the list. #41 is the Plurality Top Two. Removing the single choice limit in the first phase vaults a Top Two from #41 to #2.

It's the clue at the top of the list that shows STAR's full breakthrough: a two-phase, one-election hybrid of the Rating and Ranked Choice categories. Dr. Smith's simulations treated that best overall system as a two-election process, Mr. Quinn's according to the one-election rules of STAR. In Mr. Quinn's words, STAR is "unquestionably a top-shelf method."

The Evidence. A 2012 exit poll study conducted in Manhattan’s 69th Assembly District substantiates the claim that minor party candidates are unfairly marginalized by today’s system. Participants in the study were asked to re-cast their presidential votes using Plurality Voting and a variety of alternate voting methods, including Approval Voting on each candidate. The results were striking: 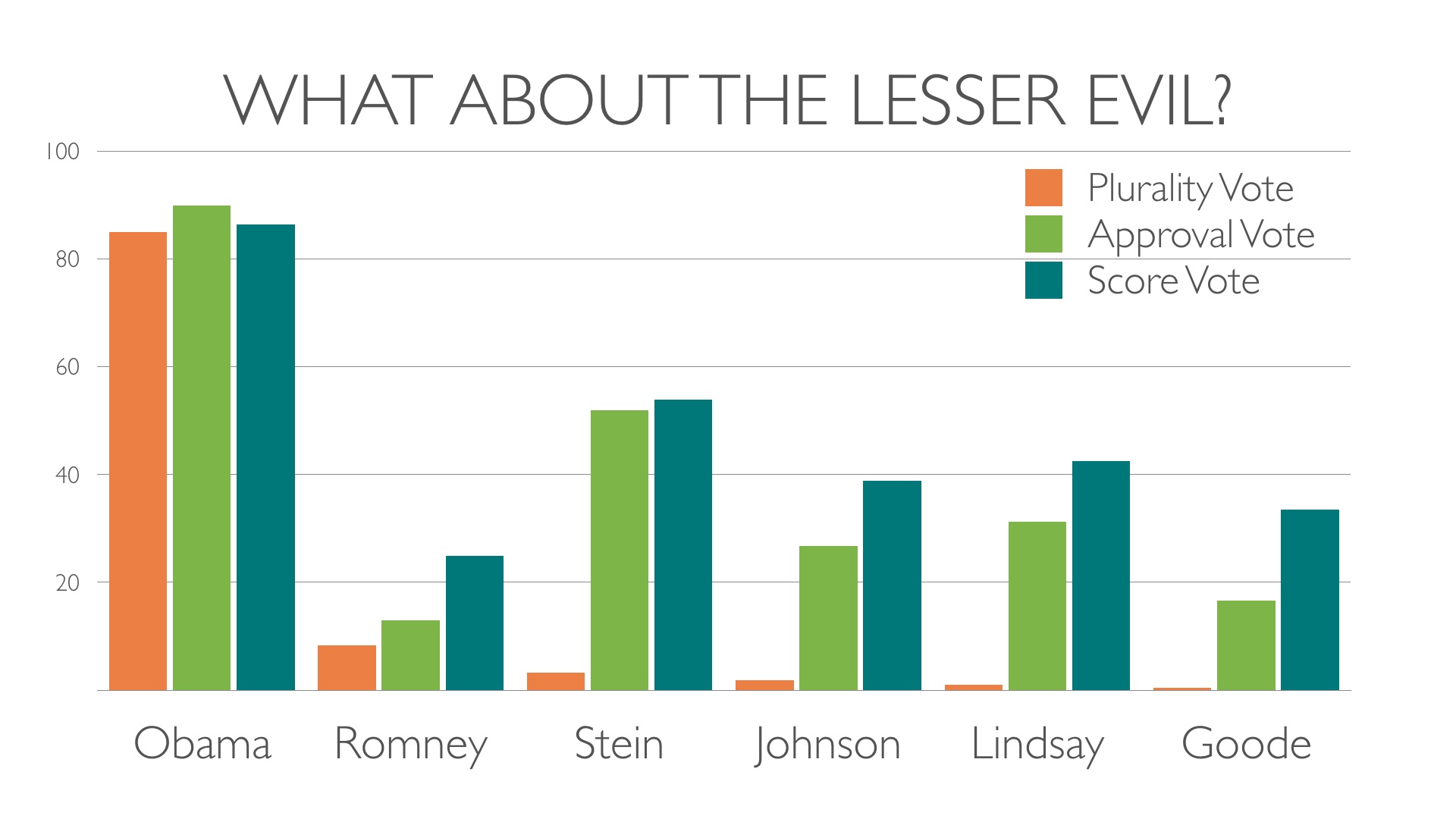 Although the district is clearly not philosophically representative of the public as a whole, the single choice limitation empirically favors the two best-funded major party candidates. If voters are given the opportunity to rate each candidate equally and independently then all candidates will receive a more accurate measure of voter support.