When we hear "one person, one vote," most people think of the right to vote itself, but the fight for an equal vote has been a long one, and gaining the right to vote was only the first step. The idea is that your vote should be just as powerful as mine, no matter who you are, what party you belong to, where you live, or how many candidates are on your side.

In other words, if an election was tied before you voted, I should always be able to cast an opposite vote that would bring the election back to a tie.

The Equal Vote Coalition's mission is to promote true equality in the vote itself.

Our current voting method is inherently unequal, and this inequality has decidedly negative consequences: outsized influence of money in politics, hyper-partisan rancor, and widespread electoral disenchantment.

The U.S. Supreme Court has declared that equality of voting - one person, one vote - means that the weight and worth of the citizens' votes as nearly as is practicable must be the same. The astute reader may have noticed that the Supreme Court gave themselves an out with the "as nearly as is practicable" clause, and at the time of this ruling no voting method in use had ever delivered an equal vote, but that has changed. 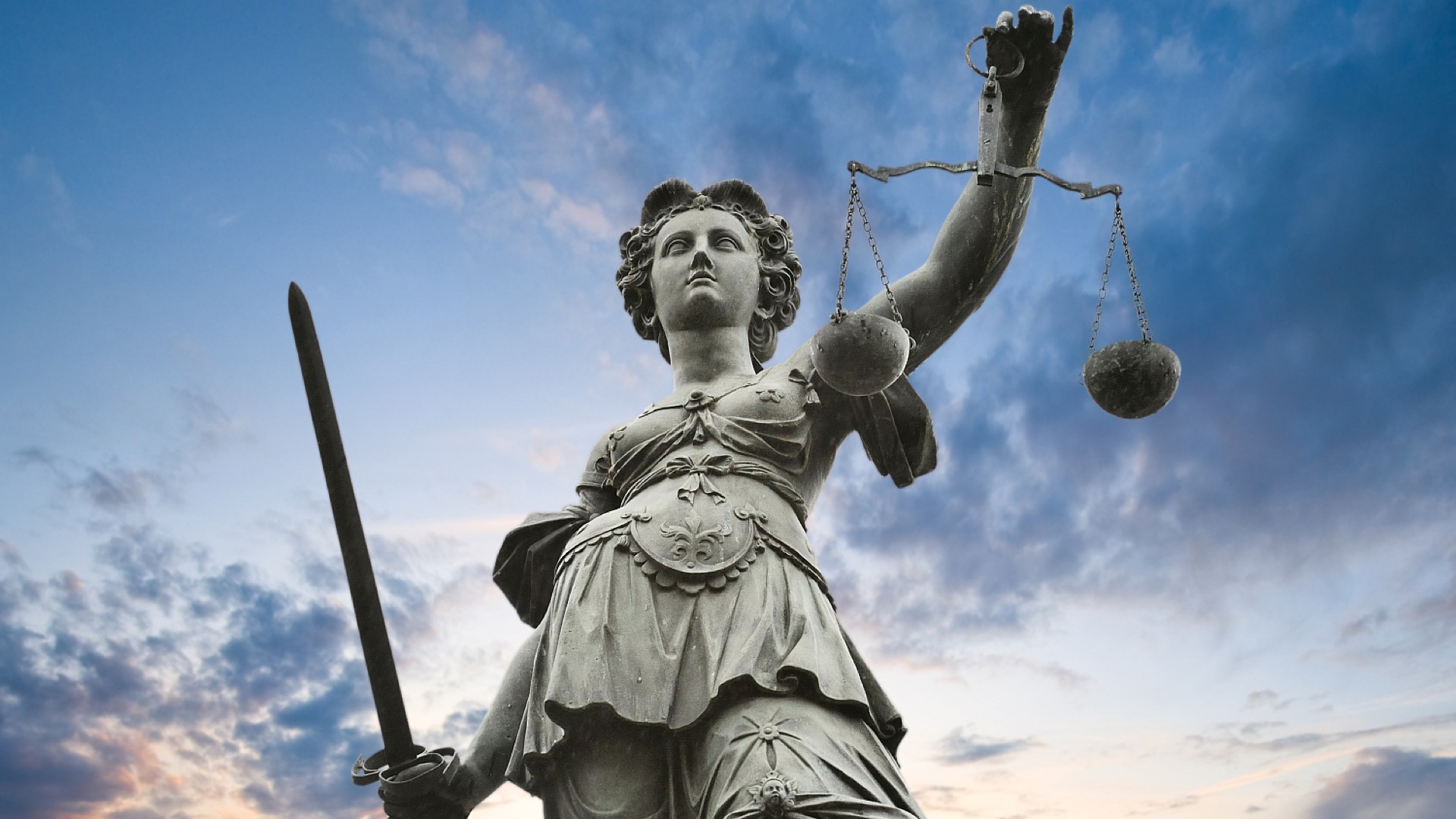 Lady Justice stands holding the scales, the original test of balance and equality.

The examples at the national level are notorious: In 2000, Ralph Nader split the left vote and cost Democrats the presidency. In 1996 Ross Perot split the right vote and cost Republicans the presidency. Both of these candidates were scapegoated, even though the system was to blame, and the resulting backlash dealt a crushing blow to 3rd parties. This isn't just a US problem though. Throughout the world it's been proven time and time again that Choose-One Plurality voting results in two party domination as voters learn the hard way that they need to vote for a frontrunner if they want their vote to count. 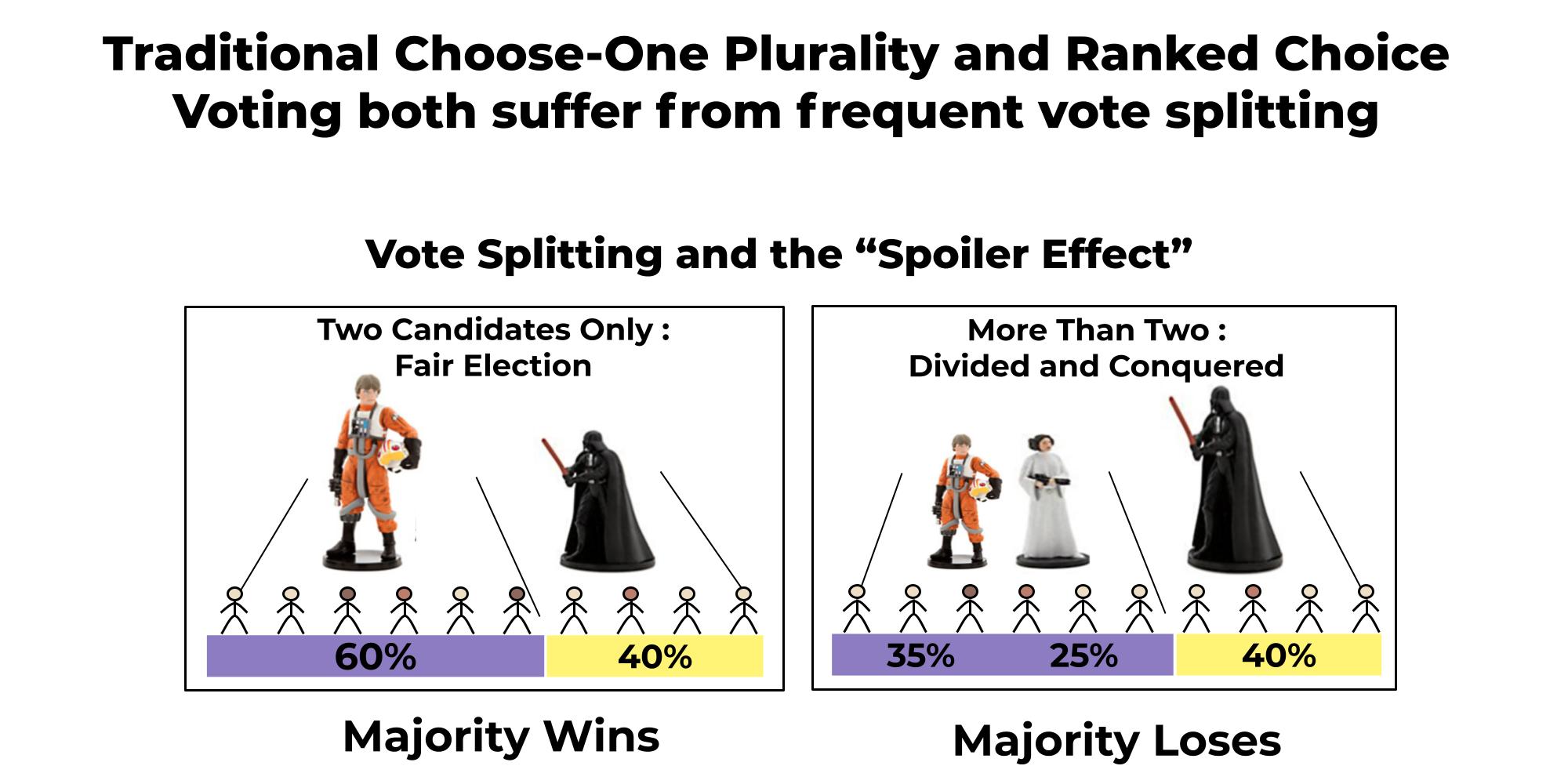 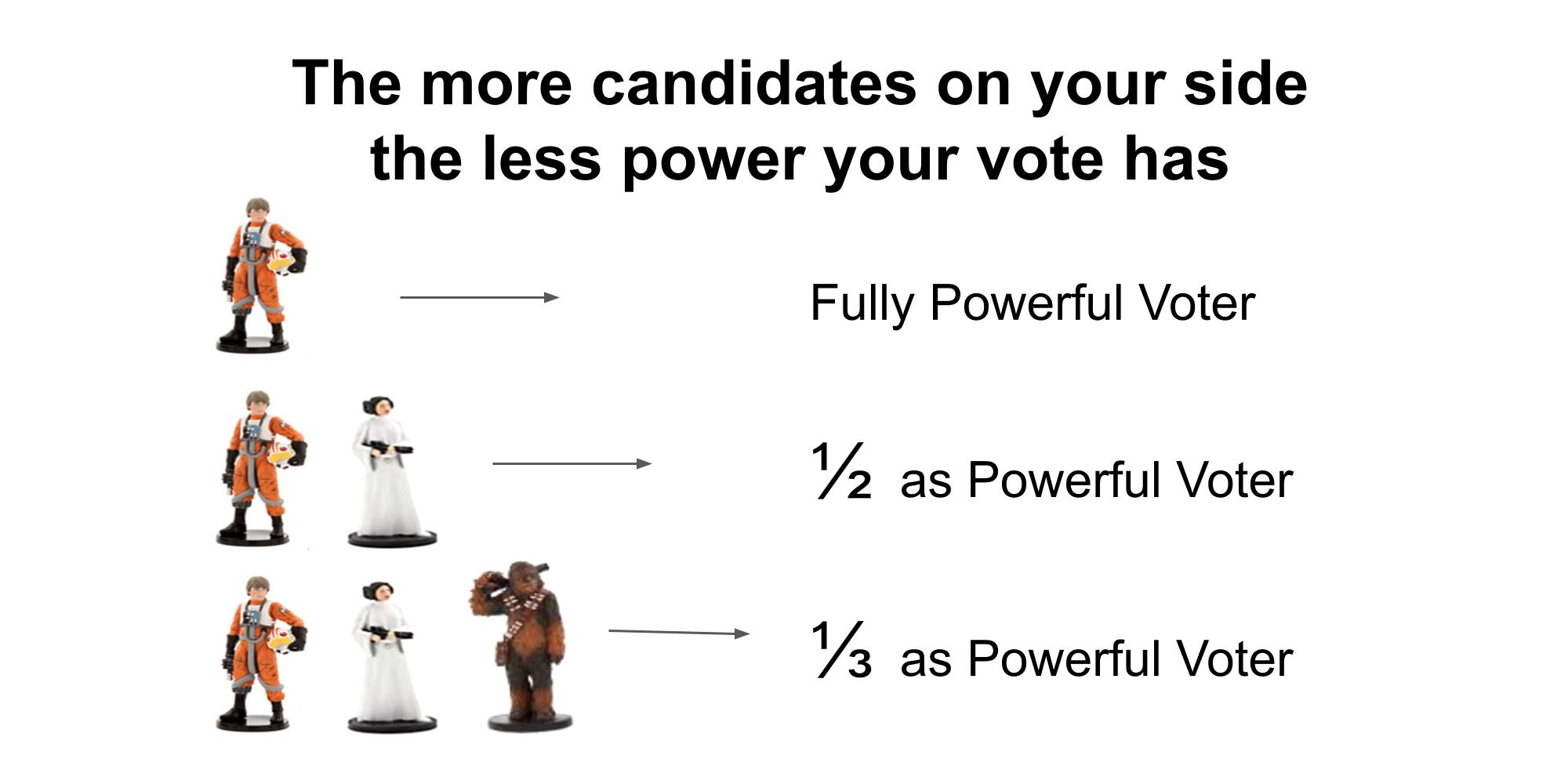 Ranked Choice Voting, where voters rank candidates in order of preference has been lauded as a solution, but in elections where the third candidate is actually competitive, vote-splitting remains a serious issue and RCV only offers a marginal improvement compared to a primary and  general election with Choose-One Plurality voting.

The issue is in the way the votes are actually counted. The version of RCV in use today (Instant Runoff Voting,) works like a series of Choose-One elections where the 1st choice votes are counted and one candidate is eliminated in each round. It works well if your favorite is weak and your vote is quick to transfer, but for voters whose favorite is a strong underdog that isn't eliminated until late in the game, their next choice may never come into play. One study of 96 recent elections in the USA found that on average over 10% of RCV ballots were not counted in the deciding round of the election. This study and others also showed that historically marginalized communities are more likely to have their ballot not count in RCV. Another study showed that Ranked Choice is expected to lead to spoilers in 15% of competitive elections, or worse if there are more candidates. We can do better.

Luckily, many voting methods are completely immune to vote-splitting. As it turns out, when voters can weigh in on each candidate individually, when all ballot data is counted, and when voters are able to show equal preference, vote-splitting is eliminated. All voting methods which do this pass the Equal Vote Criterion, including STAR Voting, Score Voting, Approval Voting, 3-2-1 Voting, some Condorcet methods like Minimax voting, Ranked STAR, and a number of others. Whether you prefer a traditional ballot, a 5 star ballot, or a ranked ballot there are voting methods that can ensure an equally weighted vote. This is not something we need to compromise on!

The Equal Vote Coalition is the driving force behind STAR Voting, an innovative voting method for more fair and representative elections. With STAR Voting voters use a 5 star ballot to show their preference order and level of support for the candidates. STAR Voting eliminates vote splitting and the spoiler effect, empowering voters and encouraging more positive campaigning, which in turn leads to more fair and representative elections.

STAR stands for Score - Then - Automatic - Runoff, and that's exactly how it works: You score candidates from zero (worst) up to 5 stars (best). Your vote automatically goes to the finalist you preferred between the two highest scoring candidates, so even if your favorite can't win, it's safe to vote your conscience without worrying about wasting your vote. 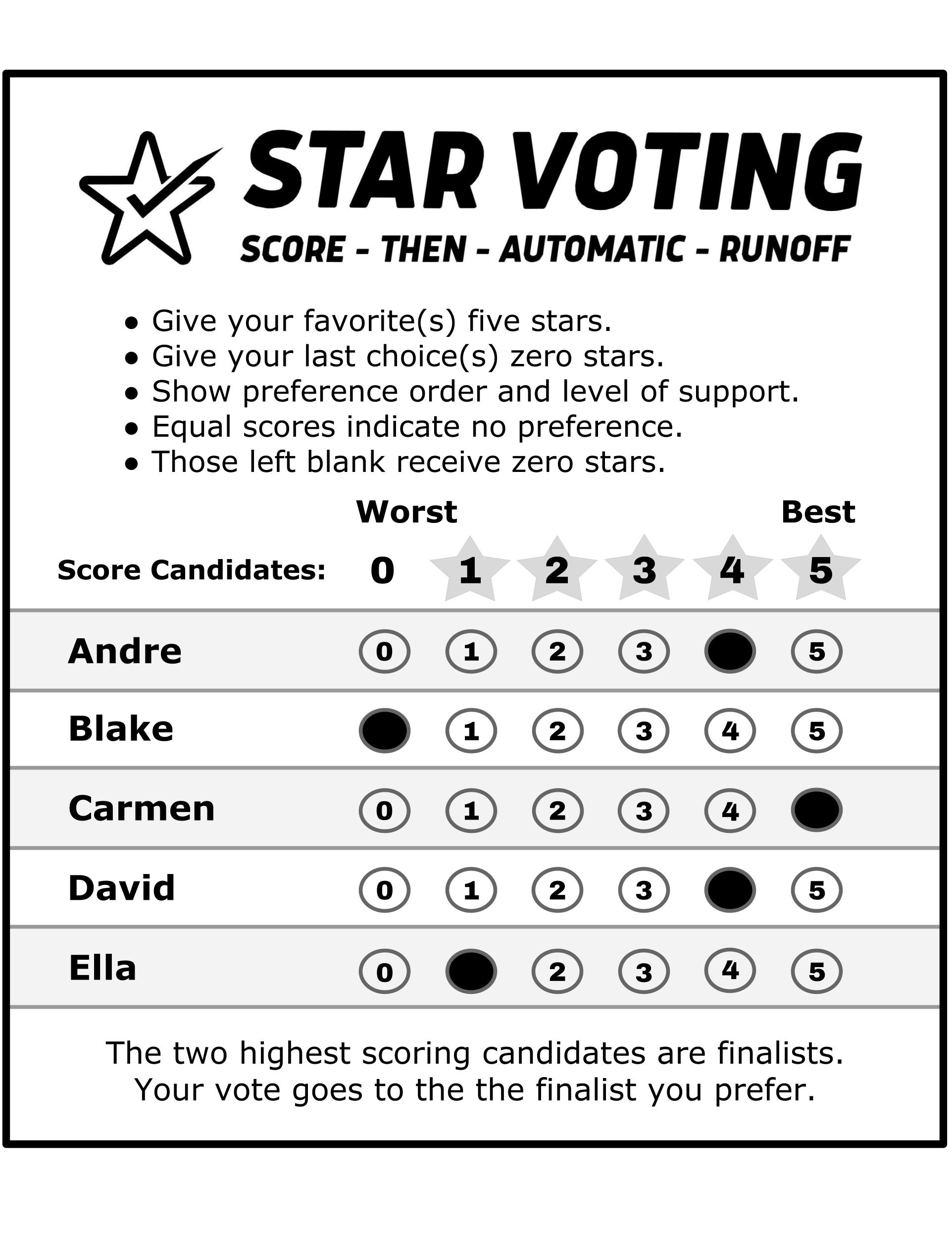 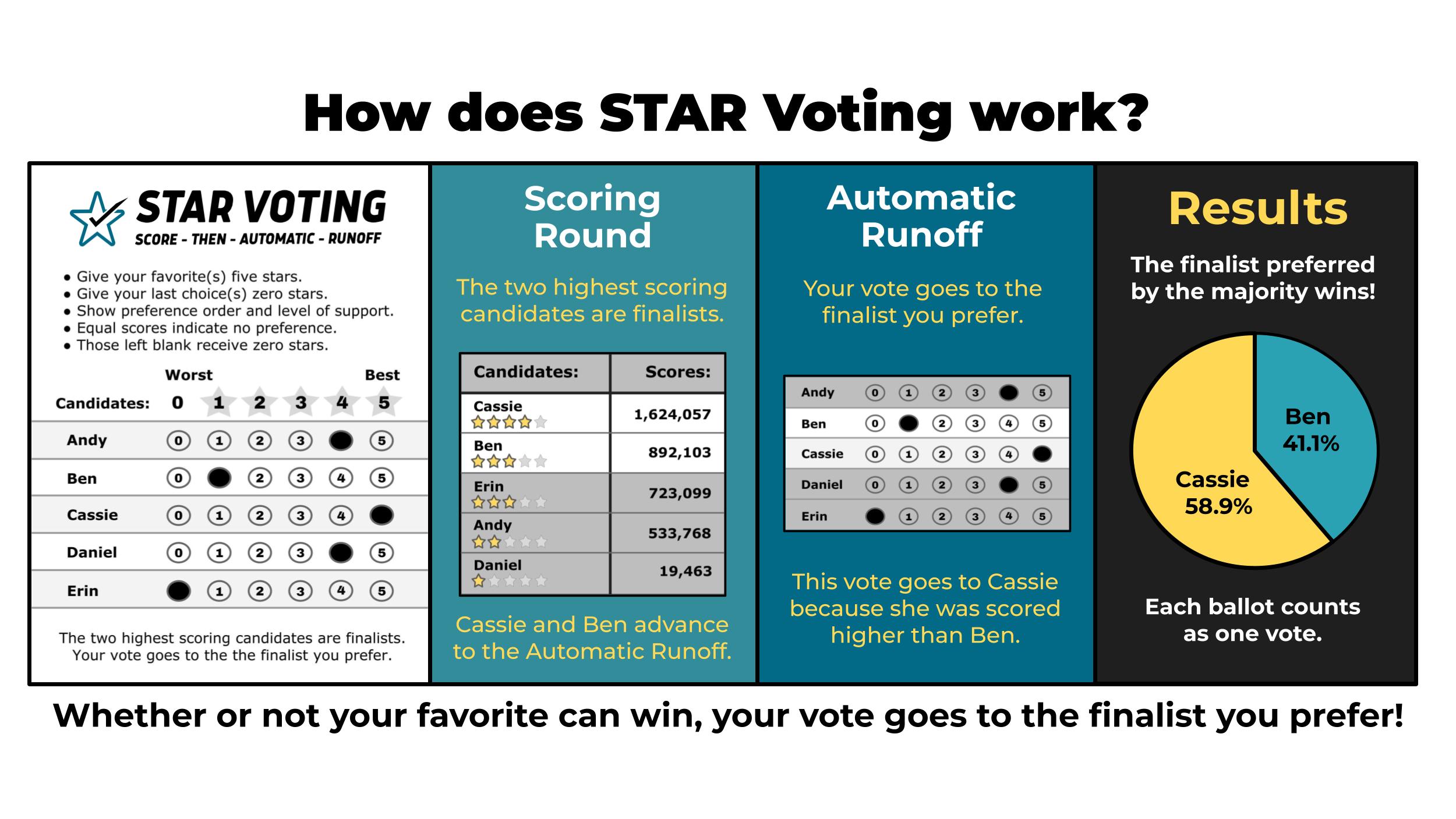