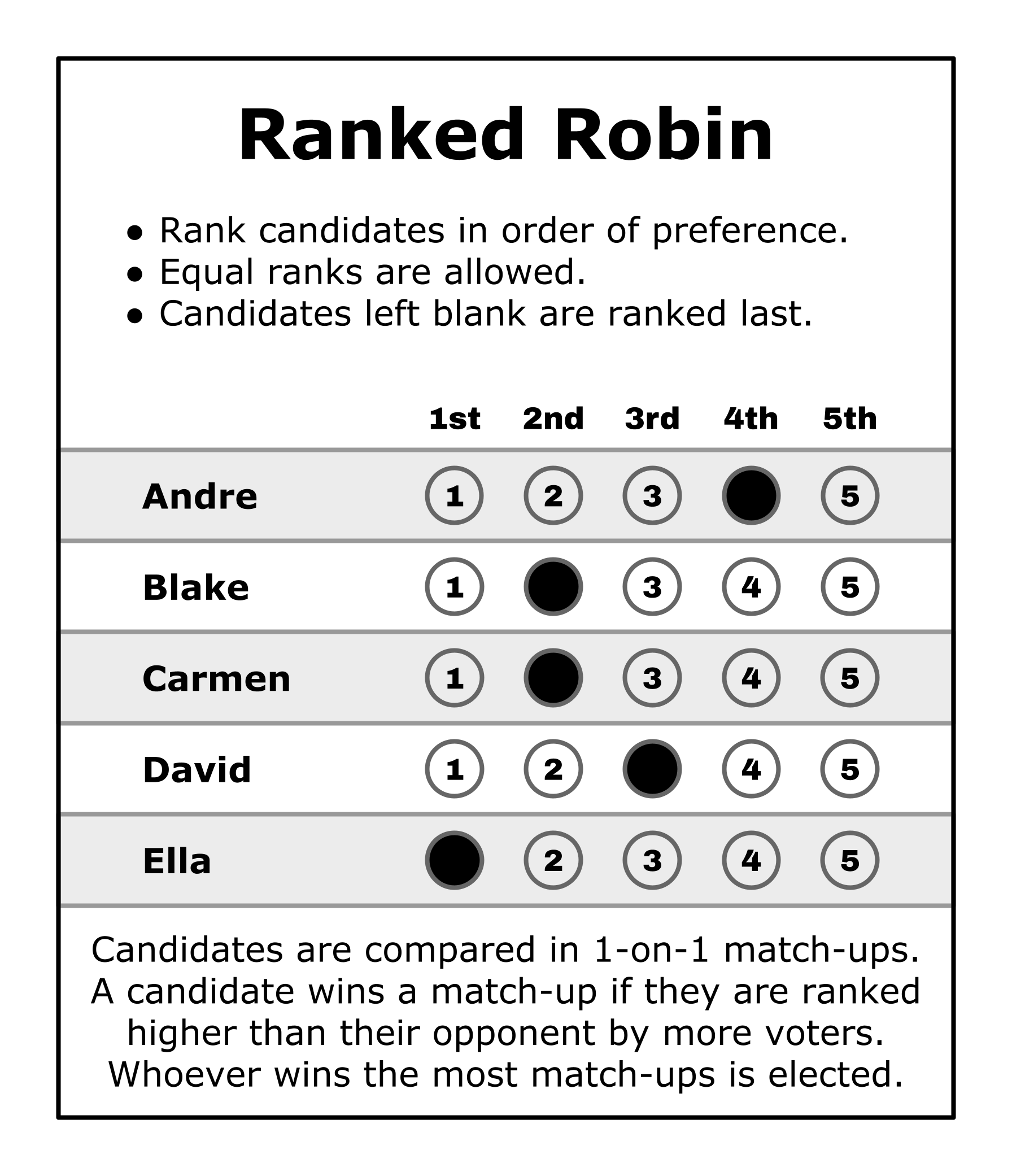 In a Round Robin tournament, each contestant faces off against each other contestant, and the one who wins the most matches wins the tournament. This is essentially how Ranked Robin works, but by using ranked ballots, the whole tournament can happen all at once.

For voters or jurisdictions who are sold on the idea of ranked ballots, we recommend Ranked Robin. Ranked Robin is a top-tier method for tallying ranked ballots that empowers voters to vote their conscience, doesn't waste votes, and delivers accurate, representative results.

Most of the jurisdictions in the world who are using alternative voting methods today are using ranked ballot systems, and most voters who hear about ranked voting assume that the ballots are counted as in Ranked Robin; i.e. all the rankings are counted, and the candidate who is preferred overall wins.

In fact, almost all jurisdictions that use ranked ballots actually tally them with the much more convoluted Ranked Choice Voting method instead. With Ranked Choice Voting, ballots are tallied in rounds, and in each round, only voter's first choice (or top remaining choice) is counted. Candidates are eliminated in rounds, transferring votes to voters’ next choices, if possible. Some votes inevitably are unable to transfer, and the election is called when one candidate has a majority of ballots which are still in play. In most competitive elections, there will be a number of voters whose ballots are not able to be counted in the deciding round, even if their votes could have made a difference. These are called "exhausted ballots." Ranked Choice Voting elections are often oversold with claims that it's safe to vote for your honest favorite, that your vote won't be wasted, and that if your favorite is eliminated, your next choice will be counted. These claims are all objectively false.

In short, Ranked Choice Voting ignores relevant ballot data, which can skew the results in competitive races. Some voters whose favorites can't win will have their next choice counted. Some won't. This is fundamentally unfair and we can do better!

The academic community in voting science has long been calling for jurisdictions which use ranked ballots to upgrade from RCV to a better method, and something in the Condorcet family of voting methods which uses the same ranked ballot (there are a number of variations) is a logical choice. For this reason, we present Ranked Robin.

Ranked Robin compares candidates in 1-on-1 match-ups. A candidate wins a match-up if they are ranked higher than their opponent by more voters. The candidate who wins the most match-ups is elected the winner.

If multiple candidates tie for the greatest number of match-up wins, elect the tied candidate with the best average ranking.

Carmen won the most match-ups against other candidates, so she is elected the winner.
We can also look at Carmen's win margins to see how she fared in each of her match-ups.

The case for Ranked Robin:

Ranked Robin is Condorcet voting designed with a focus on keeping it simple and transparent for the general public and keeping it practical for real world elections. Condorcet methods, originally invented in the 13th century, have long been a major interest of voting reform enthusiasts in part because of their consistency in delivering accurate results and resistance against strategic voting. However, a few factors have prevented the Condorcet movement from coalescing around a viable proposal. Now, with growing evidence of the many issues with Ranked Choice Voting, which has dominated voting reform for the last century, there is a renewed need for a ranked method that comprehensively addresses these concerns and can produce the great results voters demand.

You can host elections using Condorcet voting online with the Condorcet Internet Voting Service. Though they don't offer Ranked Robin specifically at this time, the vast majority of elections will give the same results regardless of which Condorcet method you use.