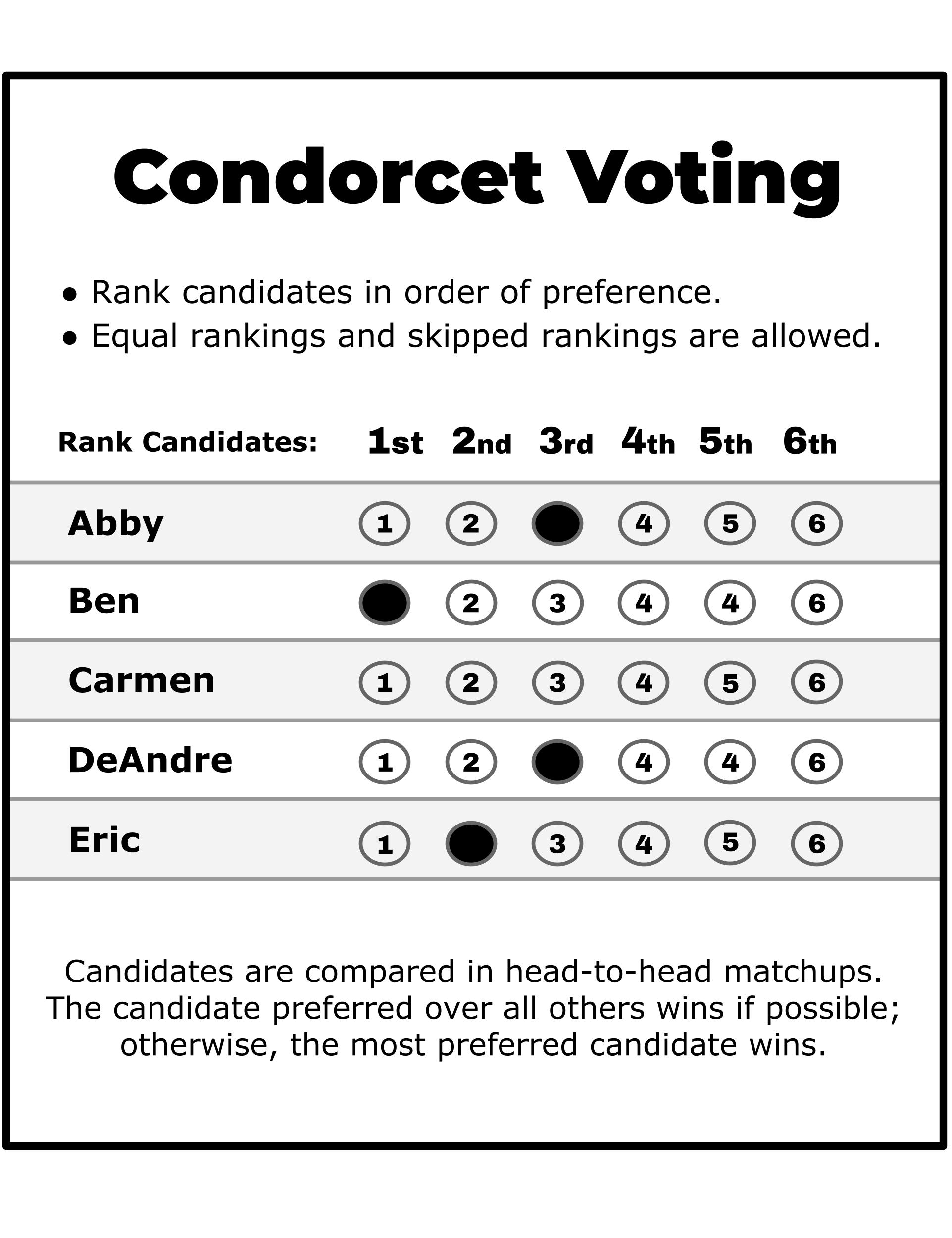 Condorcet is almost universally regarded as the most fair, representative, and accurate way to tally ranked choice ballots for single winner elections, and it's worth noting that there are Condorcet methods that work with 5 star ballots as well.

On the advice of leading Condorcet experts and advocates, including Professor Nicolaus Tideman, we recommend the Minimax method, described below with the 'Smith Set' and 'Margins' variations for tallying ranked ballots.

Step 1. Find the candidate who was preferred over all others.

For each pair of candidates, add up the number of voters who preferred each. In the vast majority of full scale elections this will result in a single winner.

The full preference data for the election can be recorded in a preference matrix, a helpful tool for recording and making sense of the ballot data: 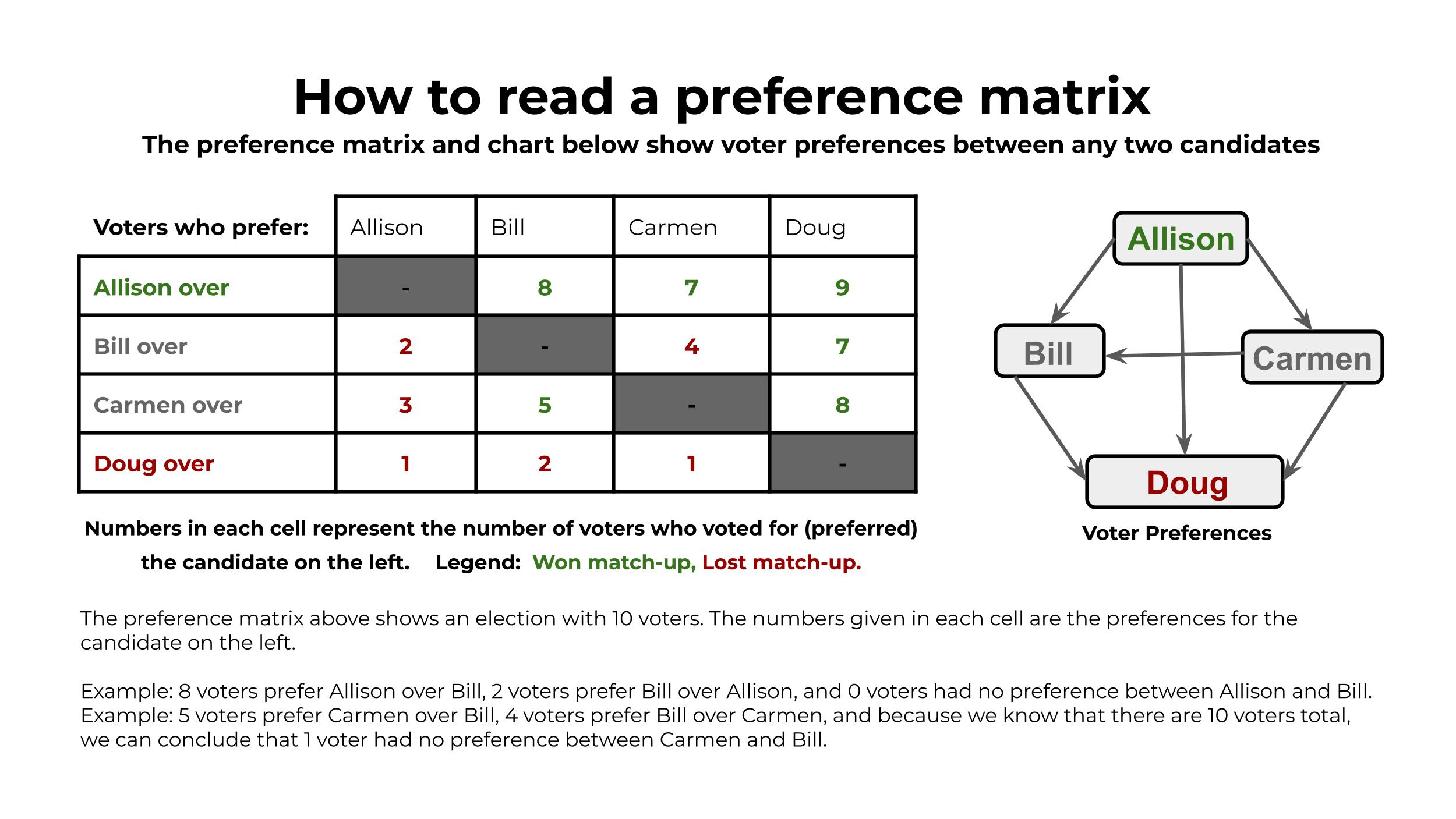 2. Elect the Condorcet winner if possible.

In the example above, Allison is the Condorcet winner because she is preferred over all others. If this doesn't narrow it down to only one winner you have a Condorcet cycle, or rock-paper-scissors type tie.

The next step is to find the group of finalists (the Smith Set,) who are collectively preferred over all others, while eliminating the candidates who aren't preferred over any of the finalists.

4. Calculate each finalist's margin of loss across all of their races. The finalist with the smallest margin wins:

The example above shows five finalists. In order to find a winner, we calculate the margin of each candidate's worst loss. 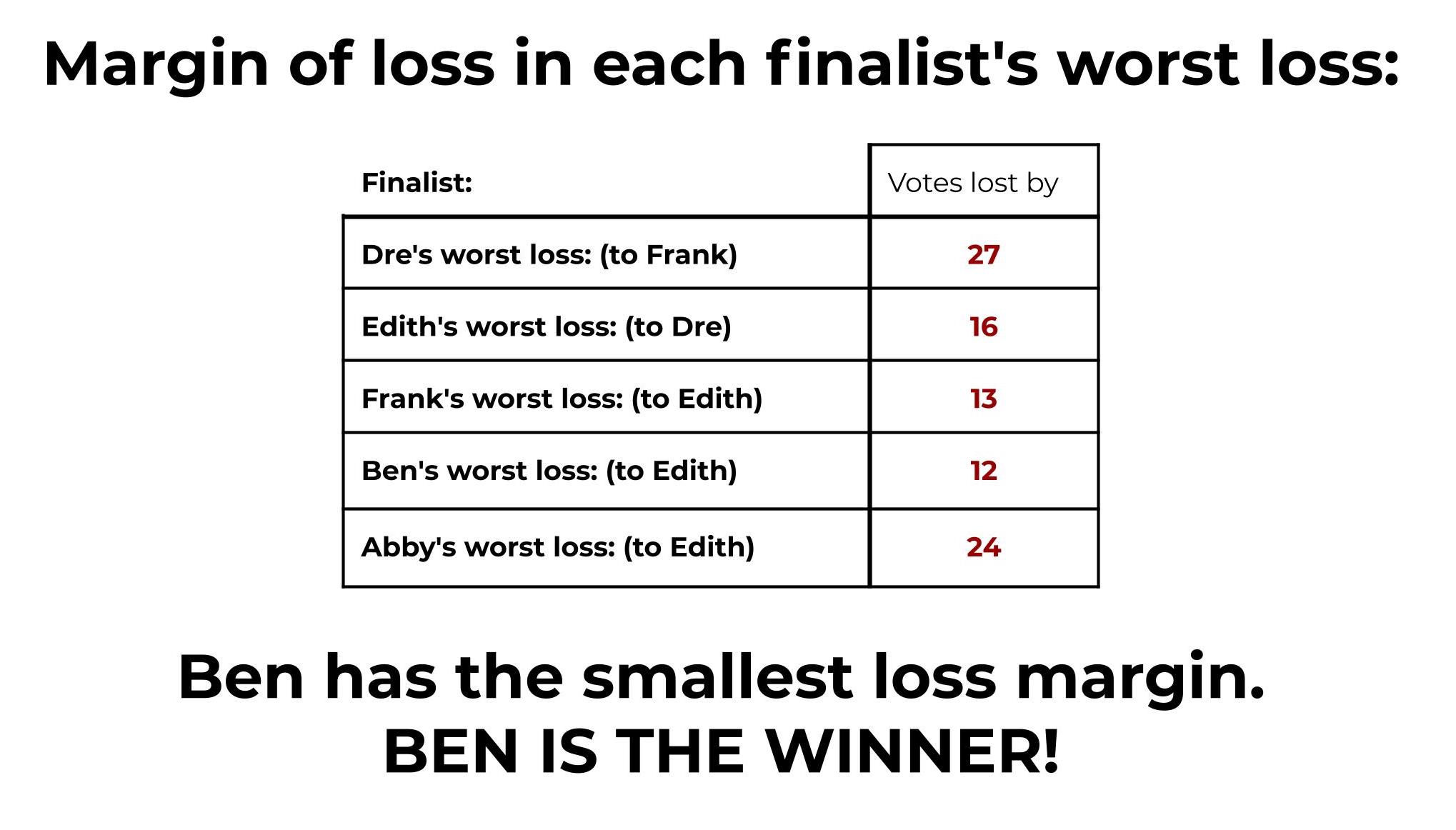 Note: Both of the issues above are eliminated if a five star ballot Condorcet method like "Smith//Score" (see below) is used.

There are a number of Condorcet voting methods with different variations on the tie-breaking protocol including high performing ranked options such as Minimax, Ranked Pairs, Schulze, and variations of each. Among experts and advocates in the field including Dr. Nicolaus Tideman, Department of Mathematics, Virginia Tech, and Professor Emeritus Richard Darlington, Department of Psychology, Cornell University, there seems to be a growing consensus around the Smith//Minimax option, which is the method described above. For rated or 5 star ballots, Smith//Score is another great option. Keep in mind that regardless of the Condorcet variation you prefer, the winners for most of the top-tier Condorcet methods will be the same the vast majority of the time.

A few Condorcet methods use flawed single-winner voting methods as the tie-breaking mechanism. We do not recommend Condorcet paired with Instant Runoff Voting (VoteFair) because IRV ignores some voters’ rankings and thus can skew outcomes in close competitive races with multiple candidates, which is exactly the scenario where a tie-breaker may be needed in the first place. We also do not recommend the Condorcet Borda method because it can result in outcomes that are worse than random if voters are strategic, which is highly incentivized in Borda methods.

Condorcet as a metric for measuring voting method accuracy:

The Condorcet method is often used to measure the accuracy of other voting methods because it takes into account all the voter preferences from all ballots. For ranked methods, preference data is all you have, so the Condorcet winner is always the most representative winner based on ranked ballot data alone. For methods that use score ballots, where the ballots also show voter's level of support, Condorcet is still a good metric, but the data on level of support may make a compelling case that another candidate was in fact more representative. Regardless of the metrics used to measure accuracy, Condorcet methods tend to come out in the top tier.

Condorcet as a tiebreaker:

Condorcet, and in particular the Minimax method described above, was designed to be a highly effective and fair tiebreaker. Minimax is a great tie-breaking protocol to adopt for voting methods that allow voters to show their preference order.

The case for Condorcet Voting:

Condorcet Voting was first invented in the 13th century and is the original Ranked Choice Voting method, but in modern times the voting reform movement has been largely focused on the Instant Runoff Voting (IRV) version. In 1870 when IRV was invented, computers were not an option and tabulating Condorcet elections was time consuming. In contrast, IRV was easier to hand count and was logistically much more viable, despite the fact that Condorcet voting is significantly more accurate and more resistant to strategic voting. While both methods start with the same ranked ballot, Condorcet voting counts all ballot data and does not ignore or discard any rankings or any ballots. IRV on the other hand only counts some of the rankings given and up to a 1/3 of ballots may not be counted at all in the deciding round, which can skew election results.

While this compromise may have been deemed necessary in 1870, we do not believe it's worth it, especially in the context of modern voting science. For voters who are sold on the idea of ranked ballots, we recommend the above method as a now viable option which offers much more fair and representative outcomes than the Instant Runoff method.

To try Condorcet voting for yourself you can host elections online using the Condorcet Internet Voting Service.