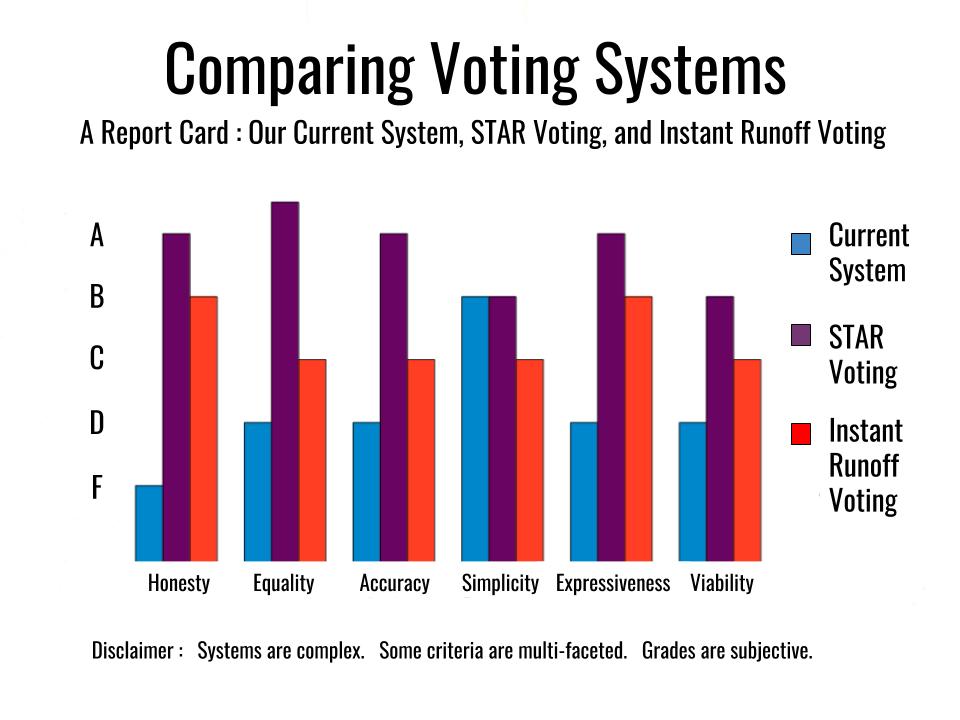 THE OPTIONS: 3 VOTING SYSTEMS UNDER CONSIDERATION IN OREGON

Our Current Voting System, known as Plurality or First Past The Post, is used in the vast majority of the USA and many places around the world. Each person votes for one candidate only. The candidate with the most votes wins. (Factors like the electoral college complicate the process but you get the idea.)

STAR Voting is a new proposed system where voters use a 5 star ballot to give each candidate a score from 0-5 to show their preferences. The two highest scoring candidates are finalists. The finalist that was preferred by more voters wins.

Instant Runoff Voting (IRV) is the most common method for counting Ranked Choice Voting (RCV) style ballots. Ranked Choice Voting is technically a family of voting systems but the term is often used to describe Instant Runoff Voting specifically. Voters rank candidates on the ballot in order of preference: 1st, 2nd, 3rd and sometimes more. If a candidate has a majority of first choice votes, that candidate wins. Otherwise, the candidate with the fewest first choice votes is eliminated. If your first choice is eliminated, your vote goes to your next choice if they haven’t been eliminated yet, and the process repeats in rounds until one candidate has a majority.

Current System: Only voters who prefer the front-runners should vote honestly. Since barely half of voters in the US are actually registered major party this is a fail. (1.) Many voters have to be strategically dishonest to optimize their vote because honest voting can backfire. GRADE: F

STAR Voting: With STAR Voting you can and should vote honestly and vote your conscience. Dishonest voting strategies are largely ineffective and likely to backfire. GRADE: A

IRV: Most voters can safely vote honestly, but for some it’s not safe to rank your favorite first. If your favorite is pretty strong but you're not sure they can win you might be better off marking a front-runner as your first choice. You can always vote your conscience if there are only 2 viable candidates but the more viable candidates there are, the more you should consider voting strategically. GRADE: B

EQUALITY – Fair, equal, and impartial. Doesn't give anyone an unfair advantage.

Current System- Two similar candidates can split supporters between them and both lose, even if one or both had support from a majority.  Because of vote splitting any voter who likes more than one candidate is at a huge disadvantage as is any candidate who is similar to their opponent. Furthermore, closed partisan primaries further disadvantage 3rd parties and candidates who are not incumbents or deemed “electable”. GRADE: D

STAR Voting- STAR Voting eliminates vote splitting by allowing voters to support multiple candidates, and then counting all that ballot data at once. This gives each voter a mathematically equally weighted vote. Any way I fill out my ballot you can fill yours out in an equal and opposite fashion so that our votes cancel each other out. This is one of the few systems that doesn’t give some voters or candidates an unfair advantage.  GRADE: A+

IRV- The ranked ballot is somewhat more fair than our current system because it mitigates vote splitting but in IRV not all those rankings are actually counted. Advocates say that in IRV if your first choice is eliminated, your next choice will be counted, but for many voters this isn't true. It depends on the order that your candidates are eliminated in. By the time your first choice is eliminated your 2nd and 3rd choices may already be gone. This means that some voters get more say than others. Not fair and not equal. GRADE: C

ACCURACY – The candidate that best represents the electorate wins:

Current System- Plurality is the least accurate voting system out there. It only gives accurate results if there are 2 candidates in the race and even then it's likely that those candidates don't represent everyone. Elections often fail to elect the candidate with the most support and there is a high danger of vote splitting, i.e. The Spoiler Effect. This drives dishonest voting, which is an even bigger threat to accurate results. GRADE: D

STAR Voting- STAR Voting gives the most accurate, representative results of any voting system tested when voters are honest. Even if voters are dishonest and strategic, Voter Satisfaction Efficiency (2.) simulations show that results are still significantly more accurate than the other methods described here. STAR Voting picks the candidate that best represents the will of the electorate. GRADE: A

IRV- IRV is about ½ way between STAR Voting and our current system in terms of accuracy. It gives accurate results for elections with only 2 viable candidates, but can fail to elect the candidate who was preferred over all others in up to 1 in 5 elections or worse when there are more candidates according to expert analysis. (3.) GRADE: C

Current System-This is about as simple as it gets in theory, although the need for strategic voting can make it hard to decide who to vote for, even if you know who you like. A primary and then a general election are needed. GRADE: B

STAR Voting- 5 star ratings are very intuitive. Explaining how the scores are counted is pretty simple but understanding how the runoff works and the implications takes thinking it through. A primary is unnecessary and tabulation only takes two rounds. STAR Voting uses a simple enough algorithm that hand recounts can be done and basic addition is all that’s required. STAR is user friendly for elections officials because it’s precinct summable. GRADE: B

IRV- Ranking candidates is intuitive, voters only need to vote once, and there’s usually no primary, but understanding how candidates are eliminated can get quite complicated if you look at the details. The multiple tournament style runoff rounds require an algebraic algorithm to tabulate. Understanding the election results can also be challenging as the order of elimination doesn’t always match who had more support. Ballots can't be processed locally and must be tabulated in a central location which can be a huge logistical challenge. Hand recounts are difficult, especially on larger scales. GRADE: C

Current System- Because we can only vote for or support one candidate, this is the least expressive system possible. At least we get a vote. GRADE: D

STAR Voting- Voters give each candidate a score from 0 through 5 and can show how much they like each candidate as well as who they prefer to who. If they don’t have a preference voters can give the candidates the same scores. All the info you give on your ballot will be counted. GRADE: A

IRV- Voters can rank 3 or more candidates but you are unable to show ties or show how much you actually like each. Not all the rankings you give will be counted, depending on the elimination process. GRADE: B

VIABILITY - Has a good chance of being passed and not being repealed:

Current System- Plurality, aka First-Past-The-Post is the most used election system in the world but it is extremely unpopular! Many people are trying to repeal and replace it with something better and many have succeed. Now that we have technology to help count ballots there’s no reason to have an unrepresentative and archaic voting system. It should be illegal. GRADE: D

STAR Voting- STAR Voting is the new and improved hybrid of RCV and Score Voting. It hasn't been adopted for governmental elections yet, but analysis is very promising and all available evidence shows that it will outperform the voting systems in use currently. Most voting machines would need a software upgrade and the code and programing is simple and doable. Many state constitutions require a “win by plurality” which STAR offers. The fact that STAR Voting has perfectly equally weighted votes could make it the gold standard for one-person-one-vote. These two things make STAR Voting widely constitutionally viable. Precinct summability means that STAR Voting scales well and is a viable option for national elections.  GRADE: B

IRV- IRV is used by countries like Australia and Ireland and in cities around the US. It was recently passed by Maine and also in Corvallis, OR. and it has some momentum. IRV was recently repealed in Burlington, Vermont and four other cities (4.), in part because of it's problems with the spoiler effect, logistical challenges with the complex algorithm, and non-precinct summability. Failed election reform is arguably worse than none at all because it makes it harder to implement future reforms in those places. Another concern is that widespread misconceptions about IRV make it a bad stepping stone reform: Many people falsely believe and state that it is safe to vote your conscience, that if your favorite is eliminated your next choice will be counted, and that it solves the spoiler effect, even though these claims are false. IRV consistently advertises more than it delivers. IRV is unconstitutional in many places because of rules around win by plurality one-person-one-vote.  GRADE: C

(1.) “29% of voters were registered Dem. and 26% Rep. at the beginning of the last election cycle with 42% Ind.” Democratic, Republican Identification Near Historical Lows. http://www.gallup.com/poll/188096/democratic-republican-identification-near-historical-lows.aspx

(2.) VSE-Sim. Voter Satisfaction Efficiency, or VSE, is a measure of the accuracy of a election method which uses thousands of simulated elections with honest and strategic voters who cluster on issues in a realistic way. http://electology.github.io/vse-sim/VSEbasic/

(3.) “[IRV] can cause spoilers in up to 1 in 5 elections or worse when there are more candidates according to expert analysis.” Frequency of monotonicity failure under Instant Runoff Voting: Estimates based on a spatial model of elections. By Joseph T Ornstein, University of Michigan, Dept. of Political Science and Robert Z. Norman, Dartmouth College, Dept. of Mathematics https://www.researchgate.net/publication/258164743_Frequency_of_monotonicity_failure_under_Instant_Runoff_Voting_Estimates_based_on_a_spatial_model_of_elections

(4.) “STV/IRV was used in roughly two dozen US cities in the early 1900’s and repealed in all of them except for Cambridge, MA. In the modern era it was repealed in Ann Arbor, MI in 1976, then these four places in the past decade: Burlington, Vermont. Cary, North Carolina. Pierce County, Washington. Aspen, Colorado.”- Clay Shentrup, co-founder of the Center For Election Science

This blog post was originally written by Sara Wolk as part of the Portland chapter of RCV-OR's analysis of voting systems.